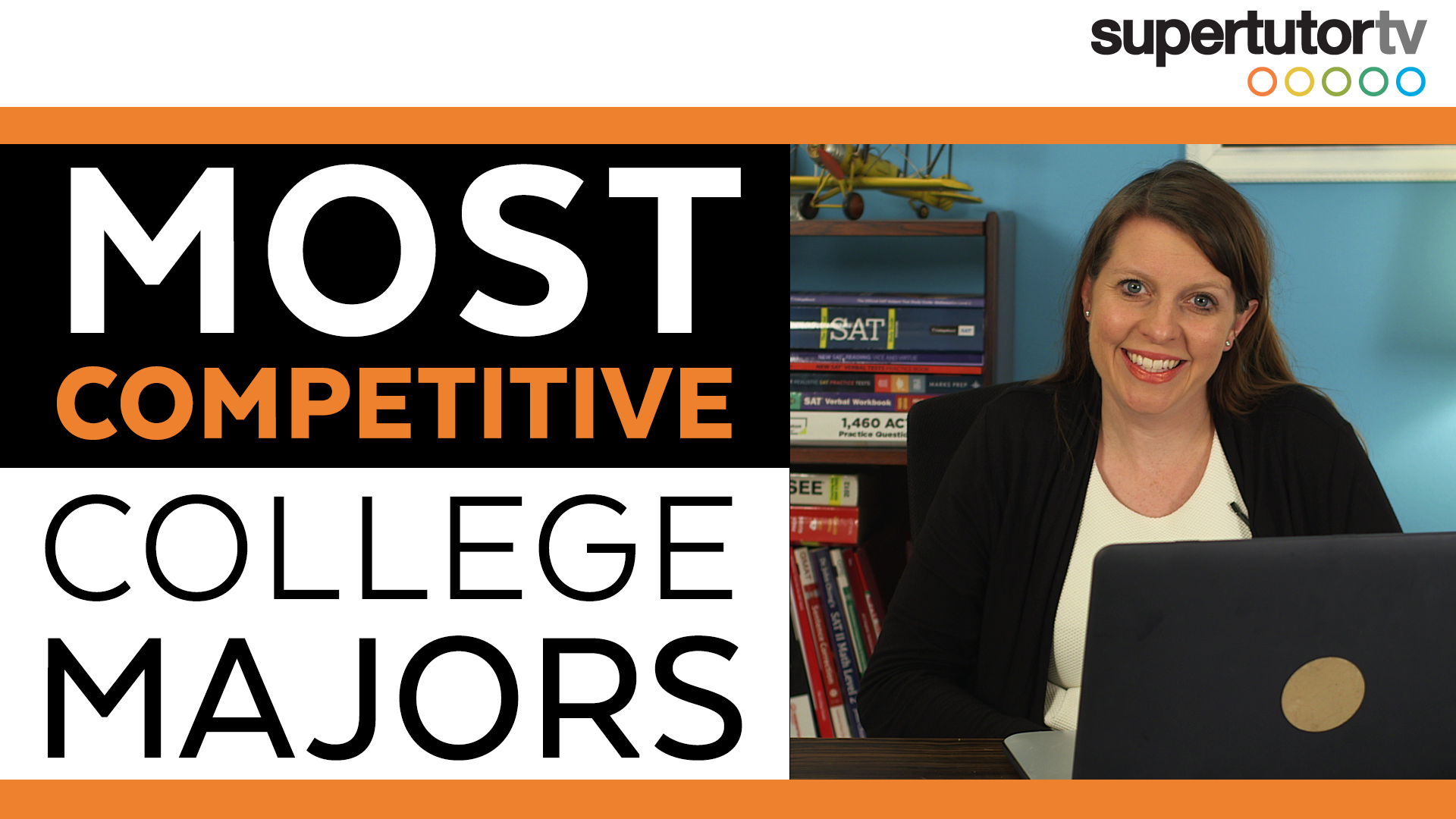 Wondering what majors in college are competitive? In this video I’ll cover 10 of the most competitive college majors. Some of these are just “popular” and thus competitive at some schools to declare or to gain admission into, or competitive in terms of field. Others are extremely challenging academically. Still others are both.

In general, for students applying to college, I recommend AVOIDING declaring interest in these majors unless you need to in order to gain admission to the program you really want, or they align with your previous activities in such a way that your story makes sense and justifies this interest. Some of these majors, such as computer science, offer amazing job prospects despite their “competitive” nature on the college level (meaning the demand for people in these fields is higher than the supply coming out of universities– thus universities are something of a bottleneck). Others, such as the arts, are the opposite: highly competitive overall, more people are interested in some of these areas than the job market can heartily sustain, or than competitive college programs in these areas can handle. Still others are just very common majors; that doesn’t mean they’re not bad to study, but it does mean in some cases that you’ll face competition at one time or another, whether in college or in the job market.

In no particular order, here they are:

Psychology is probably the most common social science major I see high school students declaring on their college applications. It accounts for about 6% of the 4-year degrees conferred in the US. It’s not a bad area to study, but don’t just put down psychology to put something down because you’re not sure. Remember many more social science and humanities areas exist than most high school students are exposed to, and some are fascinating! Sociology, behavioral economics, architecture, gender studies, American Studies. There are many other areas to explore.

Communications is another common major among undergraduate students.

The arts are competitive fields in general: more students and more people love them than there is space to support. As a result, if you’re applying to top arts programs, expect some competition. And once you graduate, that competition isn’t going anywhere either!

Engineering programs often require higher grades and scores for admission than arts and sciences in the general school. Know that admission to engineering can be tougher than to a school at large.

Though it’s rare, some universities offer undergraduate major programs specifically geared toward preparing students for a career in medicine. Whether these are direct admission to med school programs (BSMD) or Pre-Med programs, expect a lot of competition! At other colleges, a “pre-med” track is simply coursework that qualifies you with necessary prerequisites to apply for medical school. These are competitive, but not because of any admissions standards. Rather, the courses themselves are often extremely challenging, and many students drop out of classes like Organic Chemistry, worried that the academic pressure is too great.

According to CNBC, nearly 19% of the 4-year college degrees granted in the US are in business. Whoa! That’s not to say it’s a poor field in terms of employment prospects. At elite colleges, with a few exceptions, business majors are often only offered as graduate degrees. At many state and local universities, business programs are “impacted” or require higher GPAs for admission than many other majors within the school, and may also require an application process.

What do you major in if your college doesn’t offer a business degree, but you want to go into business? The answer for many students is economics or finance. While these majors are not the same as business, they are very popular as majors for students because of the attractive employment prospects for graduates.

Over 5% of 4-year college degrees are conferred in Biology, often as a segue to further study in health care or medicine.

Health care is a booming field, and many nursing programs feel that heat. Though 4-year nursing programs may be thought of as “less competitive” than medical school programs (and they are, typically requiring less rigorous benchmarks of academic achievement), they are still incredibly in demand, and access to these programs often requires more work or a more competitive application process than similar programs at the colleges that offer these programs.

As a college essay coach, this is the #1 major I see students wanting to apply for. And I also see that in general, those who declare their intentions to pursue computer science see lower admit rates at top universities than those who don’t. Still, the risk may be worth it. Computer science majors are some of the most in demand workers in our current job climate.

So what can you do to increase your chances? Evaluate all the programs a school offers, and don’t limit yourself to just “computer science.” If a school offers a program in “computer science and engineering,” “data science and computer programming” or “electrical engineering and computer science” it may admit a greater percentage of students to such programs and you’ll still land with a degree in the area you’re interested in (and maybe a more focused or second, interdisciplinary area, as well!).

Check out these related "College" posts

Why US Colleges Reject International Students

When applying to US colleges and universities, international students often face lower admission rates than their US counterparts. In this […]

How to write a WOW college essay. Tips for the Common Application, Coalition Application and personal statements

Are you looking to write the most awesome personal statement ever? Are you wondering what factors comprise essays that make […]

4 Ways To Ruin Your College Essays

Are you writing your college essays and wondering how not to completely tank your chances of admission? In this blog, […]